I’ve known him since I was born, and I can happily say that this is the best version of Corey yet.

The Duffman started his own brand called Adored during the pandemic as a way to find happiness, creativity, and light in skateboarding as a 20-year pro in the industry. Always one to stay busy, he stacked clips every day over the course of a year like a hungry am, waiting for the right opportunity to showcase a new video part.

I hit him up with a few questions about staying motivated, hooking up the newer generation, and his overall influences and inspiration on the heels of his first major video project for Adored, Runaway Kites (above).

While nepotism is bad and all, I’ll be damned if Succession isn’t the best show out. So like Logan Roy, here’s a little nepotism for your quality entertainment. 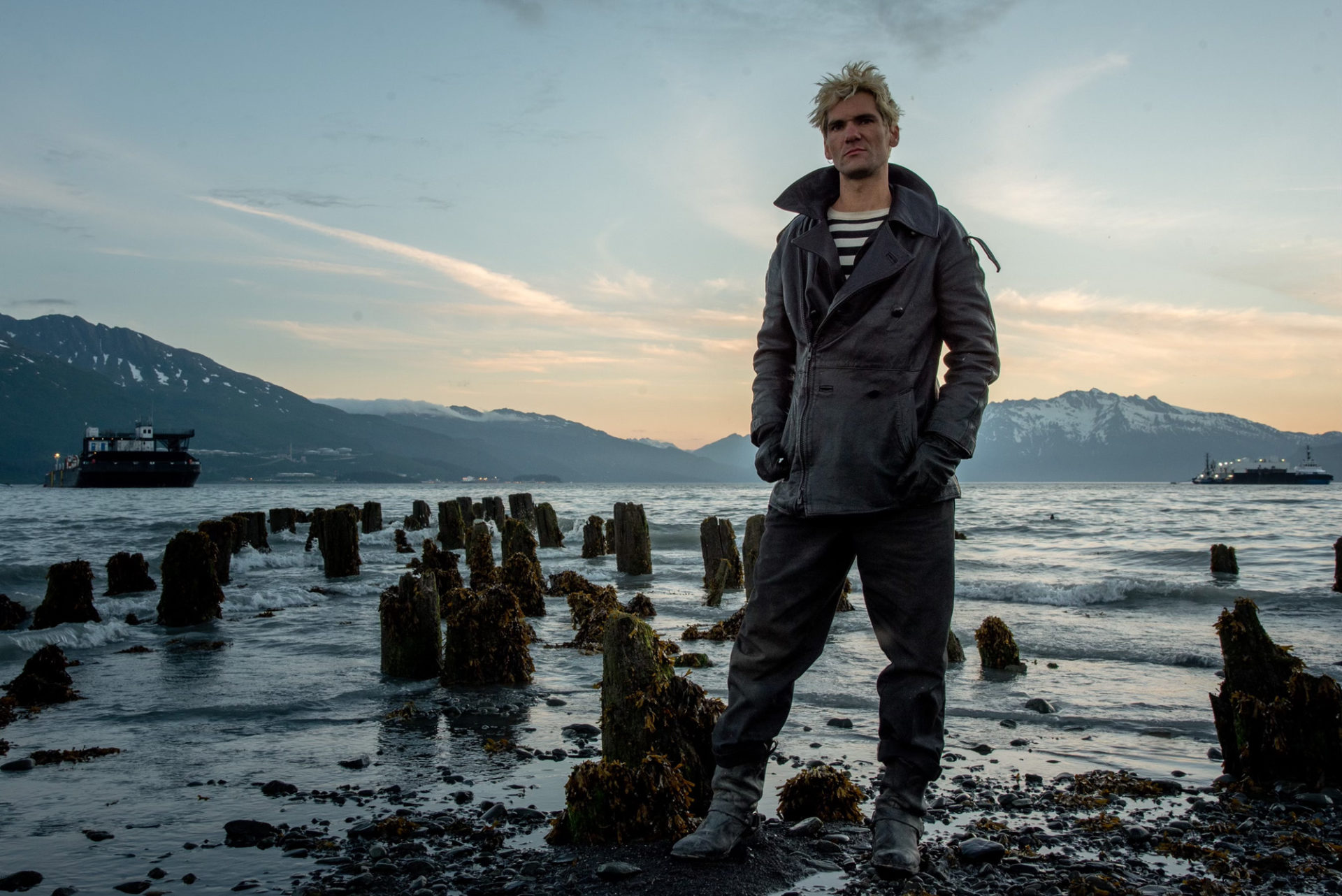 For those who don’t know, what’s the deal with Adored? Give us some background on it.

Adored is a love letter to the people, skating, brands and music that inspired me as a kid and still make me happy. I was on a company for a long time that didn’t seem to believe in me and the ideas I had. Instead of wasting away and complaining any longer that things were boring and not fun, it seemed like a good time to create something based upon the feeling of love and adoration. To celebrate compassion and fun in a community that means a lot to me, not just who’s the craziest stunt person or technically the best. Whatever happened to the freaks and the lovers that made skating so interesting? The Olympics and training facilities aren’t for everyone. I wanna celebrate pushing and smiling with friends or skating by yourself under night sky.

Skateboarding has no rules, and yet it seems like I was always being told what’s cool or what i should be doing. There are tons of us who also just wanna skate with friends and do it however we want. Adored is that smile and laugh after a fall or landing a trick. Maybe the song playing that makes you want to shake it up.

What’s it like starting your own company? Is it harder than you thought it would be?

It’s a ball of confusion. It is very hard, but I am very lucky to have so many talented friends and a patient and creative wife that help out a lot. My house is a disaster with stuff everywhere. What started off as ‘I’m going to make 100 boards twice a year,’ turned into much more. The feeling of creating something special feels good and it’s hard not to want more. I have a hard time focusing on one project and want to move forward with new projects constantly. Once again, very lucky to have some really awesome friends helping me make some ideas come to life. Adored is Rachel and myself, with the help of Richard and Ben when designs are being submitted. Adored would be nothing without the love of friends. 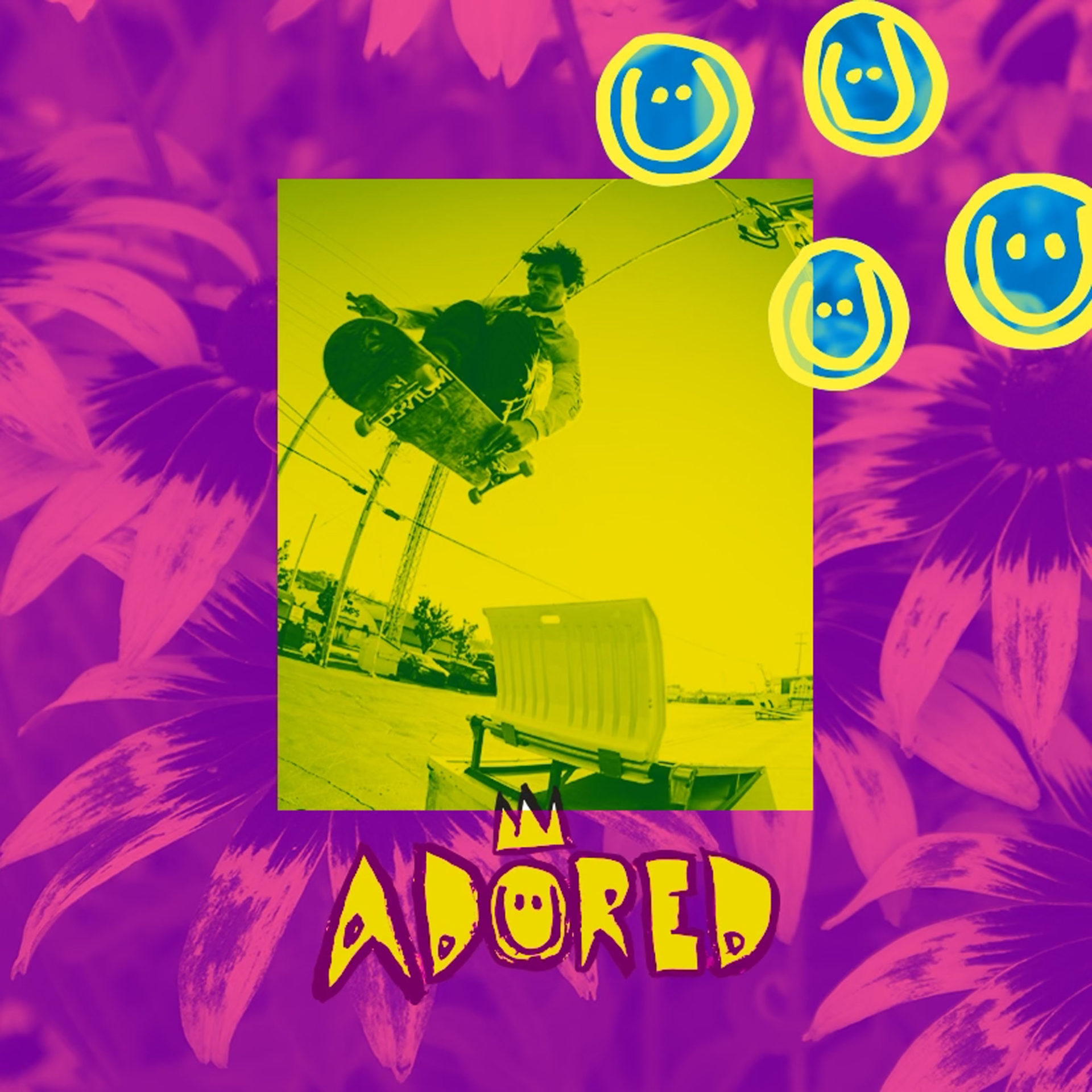 You had a ton of footage. How long did you work on this project? Is this all-new footage?

This video was filmed in two segments. Pre-injury and post-surgery. I was skating with my friend Taylor and we filmed most everything in a few sessions and all within skating distance from where I live. The idea was to film all ollies and grind at spots that were not typical ‘pro’ video part type spots. Just places that existed and could be skated in different ways. I ended up breaking my hip while filming another project. Once I was feeling a bit better, I tore my knee and was out for about a year from the injury and surgical recovery. Once I was able to roll again I wanted to get a few more tricks, and by this time the direction of the video had been completely changed. My friend Luis Arnold told me he wanted to put together the footage, and we came up with a bunch of ideas. It took some time for it to all come together, but it is all new stuff.

What’s the name ‘Runaway Kites’ mean to you? Why did you land on it for this project?

Skating has no direction and it’s free-spirited. Kites in the wind are in control and completely outta control at the same time—I guess controlled chaos. Maybe I’m just saying this because I hear Larry David on Seinfield yelling, ‘Chaos!’ As a kid, videos had names and they were cool and fun. I wanted something random with meaning as well. When I skateboard I don’t really have a plan. I just want to go fast, but I usually get caught up in a kite-eating tree of some sort. 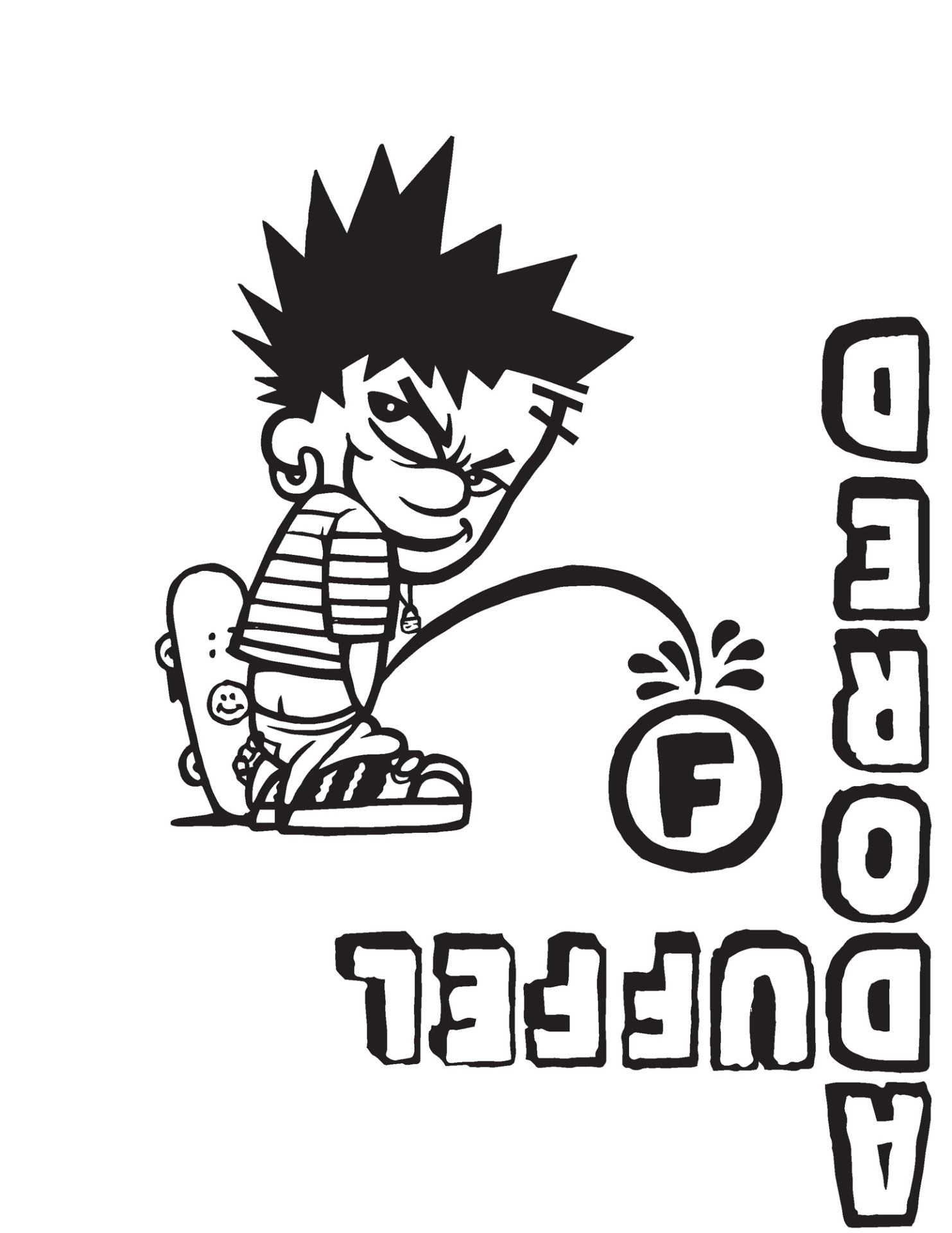 We’re in an age of skate videos being really heavy with trick, trick, trick at famous spots where it feels really planned out and people are constantly trying to one-up one another. This video doesn’t seem as concerned with that. To you, what makes a good skate video?

A skateboard video should inspire you to create and make you want to skate. I have never been concerned with one-upping or going to glory spots. Finding spots and doing whatever you want is skating to me—not following the crowd. Whatever tricks you wanna do and however you wanna do it… Skating is subjective, and some will hate this video, and that is okay. I also don’t much care for many parts. A sense of belonging is also important. I’ve always felt like an underdog and I know that I also like watching the ones that don’t follow the trends. This video is inspired by the ones that mean a lot to me without ripping them off.

Why put out a 20-minute video in this day and age? Why not just another 5 minute part?

We even made a DVD for it. We worked really hard, so why just put out another part that goes online and gets replaced by 10 more parts later that day? A longer part has more time to piss you off or make you happy. When we were younger, VHS videos kept going and going. Maybe because they wanted to fill up the whole tape, who knows? I love credits and fuck-around footage. It’s where the personality of our mentors is shown. A video part hardly shows anything other than talent and vain roll-ups. Nothing seems natural, inviting, or fun in big productions. Skits, goofing off, flowers, quotes, and shit like that rules. Skateboarding is so much more than tricks. I wanted it longer and I wish there was more footage of friends being friends. Kids in parking lots being kids. Adults in parking lots falling and laughing. Skating with their dogs and being free. Soaring around and smiling.

Do you like having the freedom to put out whatever you want now that you’re not tied to another brand and under their direction? Does it add more pressure for you?

Skateboarding evolves just as we do as people. Imagine having the same direction over and over and not having the freedom to express yourself how you want. Riding for brands at times was a constant struggle. It is a kick in the eye when your sponsors tell you what you’re doing isn’t good enough, or whatever they say. I get it when one isn’t producing, but here comes the question we all have an answer to: do you want to see your favorite skater skate or just disappear? I know I wanna see my heroes still rolling and doing what they love. As long as the passion is there, the skating can be awesome. Lance [Mountain] and Ray [Barbee] are still cool as they get. Jamie Thomas doing 47 tricks at 47. Yeah, that’s radical. I love it. Our passion shows when you truly love it. Skating has soul and it can be seen when one is connected to it. Let your heart dance, ya know. Imperfections are perfect sometimes. Never be told you don’t matter or your skating isn’t good enough. Who creates these standards? DIY attitude will always thrive and be radical—make it happen. Fuck your rules, and don’t be scared to get hated on. Be you and get groovy.

How important is music selection for a video?

Music is the most important part. It makes or breaks a part. Most classic parts not only have awesome skating and personality but a song that really ties it all together. The song helps to capture the emotion—you can’t have a video without a song that captures the feeling.

It seems you’ve been really inspired by the era you grew up skating in recently. What was so special about that time?

I felt very lost and distracted with skating, whether I was hurt or just not being motivated by the stuff that was constantly coming out. The past decade reminded me of 1999-to-2003: boring and missing something special. ’89-to-’98 just seemed so special and awesome. So much creativity and weird little pockets of skating. The raw and not so popular stuff was just so cool. I felt stuck in a uniform for a long time and wasn’t doing what I loved because I was so annoyed with what others were telling me. I ended up not doing things my way so much. Stuck on tours without skating stuff. Driving from spot to spot. Traffic and rails. I hated it. When I was a kid, it was all about skating and having fun. Rolling around like a runaway kite. No direction and pure ecstasy. Watching old videos and changing up the wardrobe brought back a smile and a feeling that was fading away. I just wanted to skateboard at shitty spots that looked fun.

You say Adored is for the homies and always hook up the younger skaters around you, even featuring them in this video. Why do you find it important to do this?

We all remember being a kid and meeting older skaters. Most were assholes. Some were cool. The cool ones made us feel special and changed our world. If I can help a kid or anyone out that needs it, we both benefit. It feels good to help out and share the good times. Adored is for the homies, always. Skaters are the homies, and it is our community. If you are down, I am down for you always. 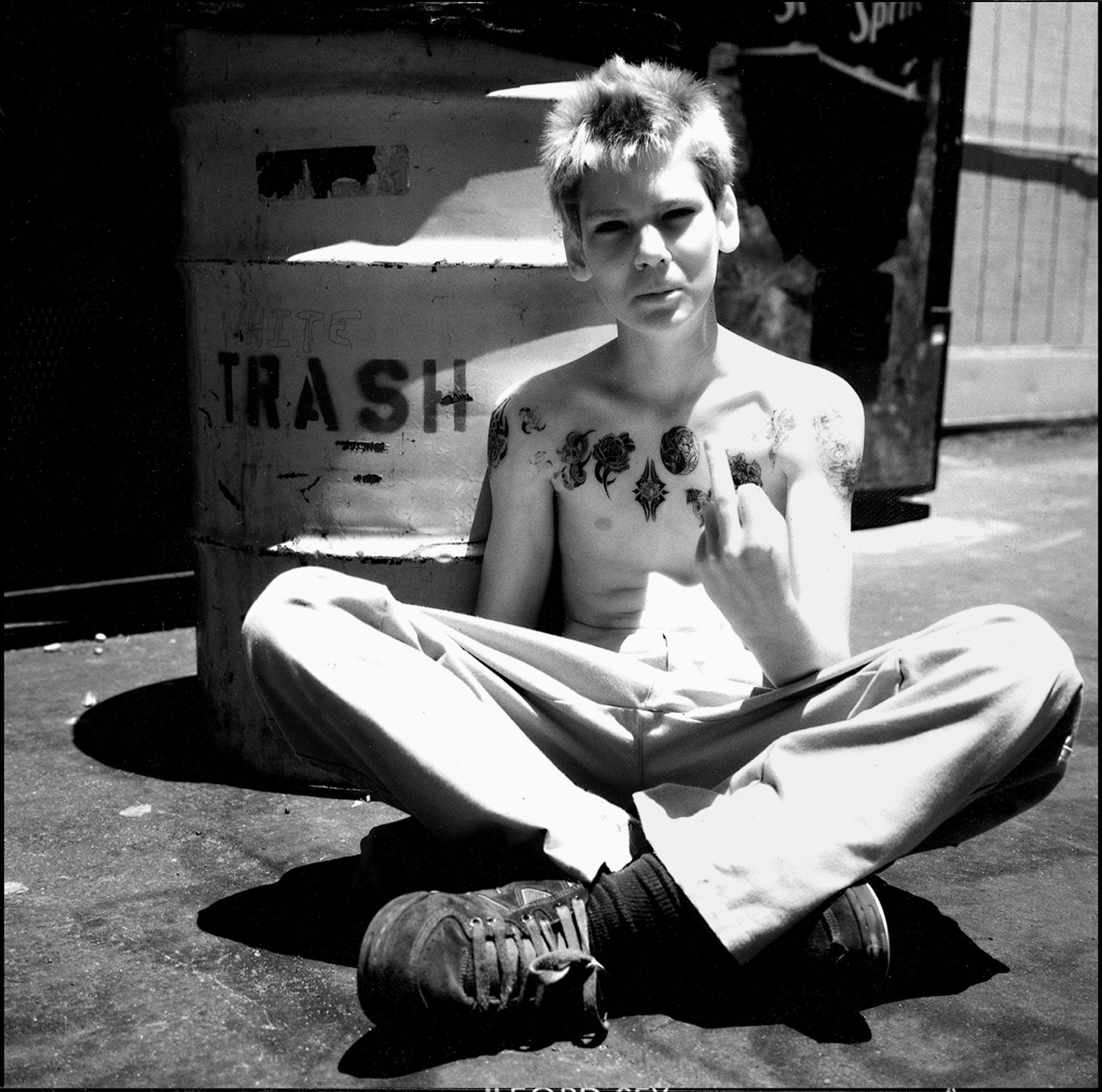 What’s next for you and Adored?

Heal up from this concussion and make more stuff with friends. Just released an Adored Record Club 7-inch with Dowd Records and Crossed Wire. Hopefully, more collabs with brands and artists that are adored by us. It would be really cool to get boards into shops as well. Skate shops are vital to the scene. Selling online is amazing because anyone can get it, but shops are so special and are hubs that educate skaters—places to meet friends, get made fun of and feel special at.

Top five records everyone should own?