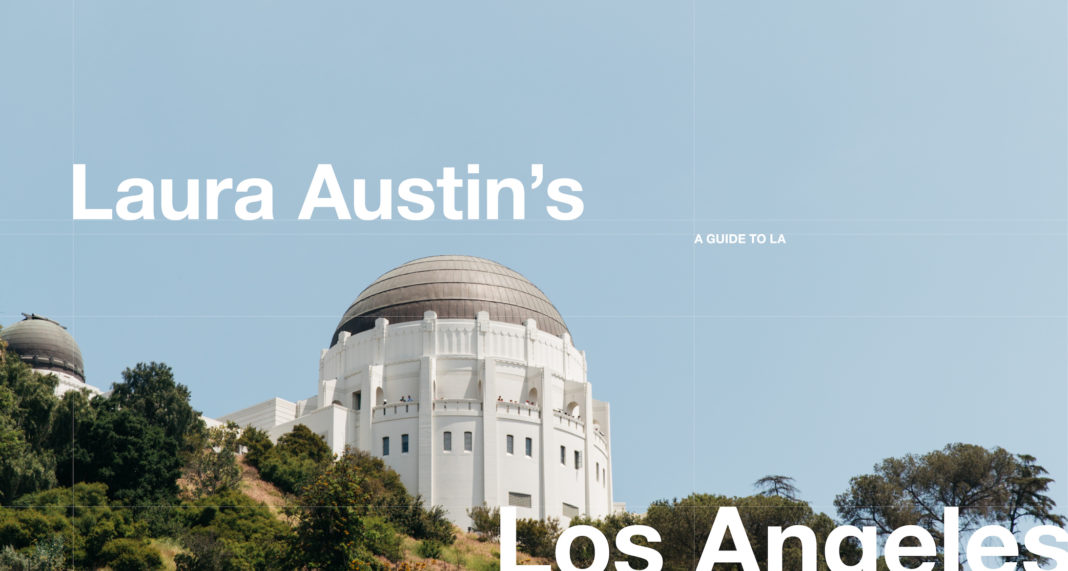 Words and photos by Laura Austin

Chances are, you’ve been to Los Angeles.

But just in case a few of our readers aren’t as well-travelled and urbane as you, we decided to ask our friend Laura Austin to cobble together a list of her favourite places to eat, sleep, drink, dance, and roller-skate in her hometown.

I don’t know if it’s necessary for me to sell you on why you should stay at The Ace. With locations in nine different cities, they have proved time-and-again that they know how to do hospitality right. For their Los Angeles location, they set up shop on Broadway in Downtown, an area rich with history, but when they moved in the area was pretty unoccupied. Over time though, a whole infrastructure of restaurants, shops, and bars have built up around it. The building the Ace Hotel occupies is the old United Artists Building, founded in 1927 as the movie studio of Charlie Chaplin, Mary Pickford, Douglas Fairbanks, and D.W. Griffith. This thirteen-story high-rise houses luxurious hotel rooms, Best Girl (their main restaurant in the lobby), a beautiful rooftop bar, and, most notably, an incredibly ornate theatre, preserved from the Charlie Chaplin days. The Ace has always done an amazing job paying respect to the cities their hotels are located in, and this Los Angeles location is no different.

Lodge Room in Highland Park is another example of an interesting old building that’s had new life breathed into it. Originally built as a Masonic Lodge in 1922, the Lodge Room is now a timeless 500-capacity music venue. In addition to the performance space, the building also houses a restaurant called Checker Hall, serving New American cuisine and overlooking Figueroa Street below. Having only popped up on the scene a little over a year ago, this place is quickly becoming a staple in the LA music scene and has already hosted the likes of Dave Chappelle, Ty Segall, Conor Oberst, and many more. So, if you are in LA check their event calendar to see if you can make a show. 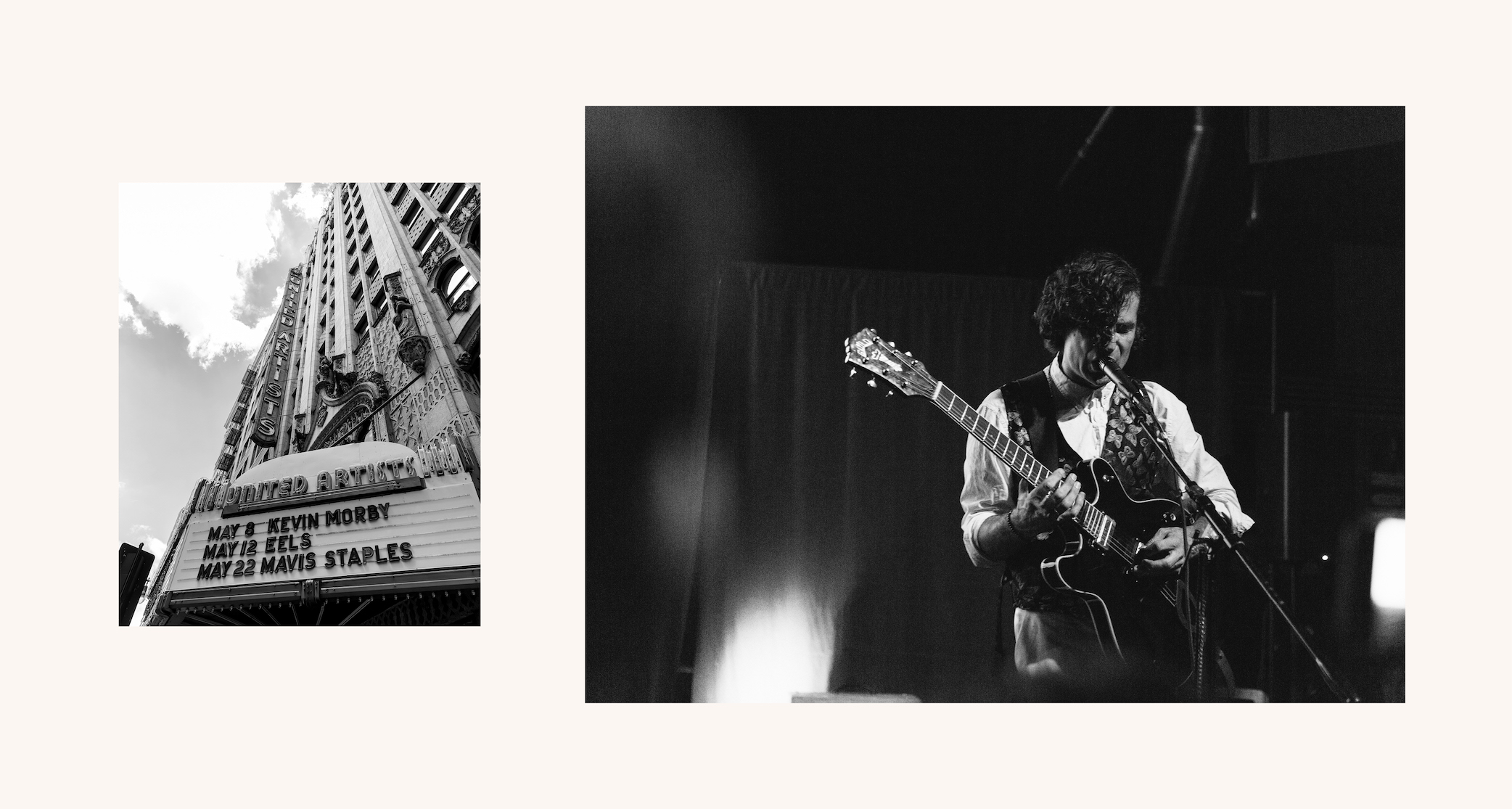 All Time is my favourite place to get caffeinated in Los Angeles, which is saying a lot since you can’t throw a rock without hitting a barista here. This little spot in Los Feliz feels different from most other coffee shops in this city in that it’s not a pretentious place where you’ll be judged for your drink order, and you’re not going to find some foofoo, over-the-top horchata latte with whipped cream and cacao shavings imported from the Yucatán. When you start with quality beans (theirs are from 49th Parallel), you don’t need to hide it behind excessive sugar. All Time is much more than just a good place for coffee–their food is amazing too. Their outdoor patio is an ideal place for brunch, and if you can manage to get a dinner reservation, the atmosphere at night provides an intimate experience that you can’t find at many places in Los Angeles.

I know what you’re thinking: out of all the places I could pick in Los Angeles, a bookstore? Really? Well, The Last Bookstore is like no other bookstore on earth. The building itself is beautiful and was originally a bank. The first floor of the building would lead you to believe it’s just your standard book store, but what makes this place so special can be found upstairs. Aptly named ‘The Labyrinth,’ the second level is a maze of bookshelves, tunnels, secret passageways, and an old bank vault filled with horror books. So, even if you haven’t read a book since you were in school (which I hope isn’t the case), it’s worth exploring all the nooks and crannies of The Last Bookstore. In a time where bookstores are seemingly becoming extinct, it makes this gem in Downtown Los Angeles that much more special.

One of my favourite things about Los Angeles is how easy it is to escape, and with Griffith Park in our backyard, you don’t need to drive far out of your way to escape the concrete jungle. Besides the Hollywood Sign, the Observatory is probably Griffith’s most popular attraction. It might seem like a played-out, touristy thing to do, but the view of the sprawling city from the deck of the Observatory is nothing to turn your nose up at. Plus, it was a central backdrop to some of the most memorable scenes from James Dean’s Rebel Without A Cause, and that’s cool in its own right. Rather than driving up to it and dealing with parking anxiety, I’d recommend taking the hiking trail up from Fern Dell. With over 4,210 acres of land, there are plenty of other things to see and do in the park as well, from the endless hiking trails, the people watching on said hiking trails, the Greek Theatre, and the golf courses. 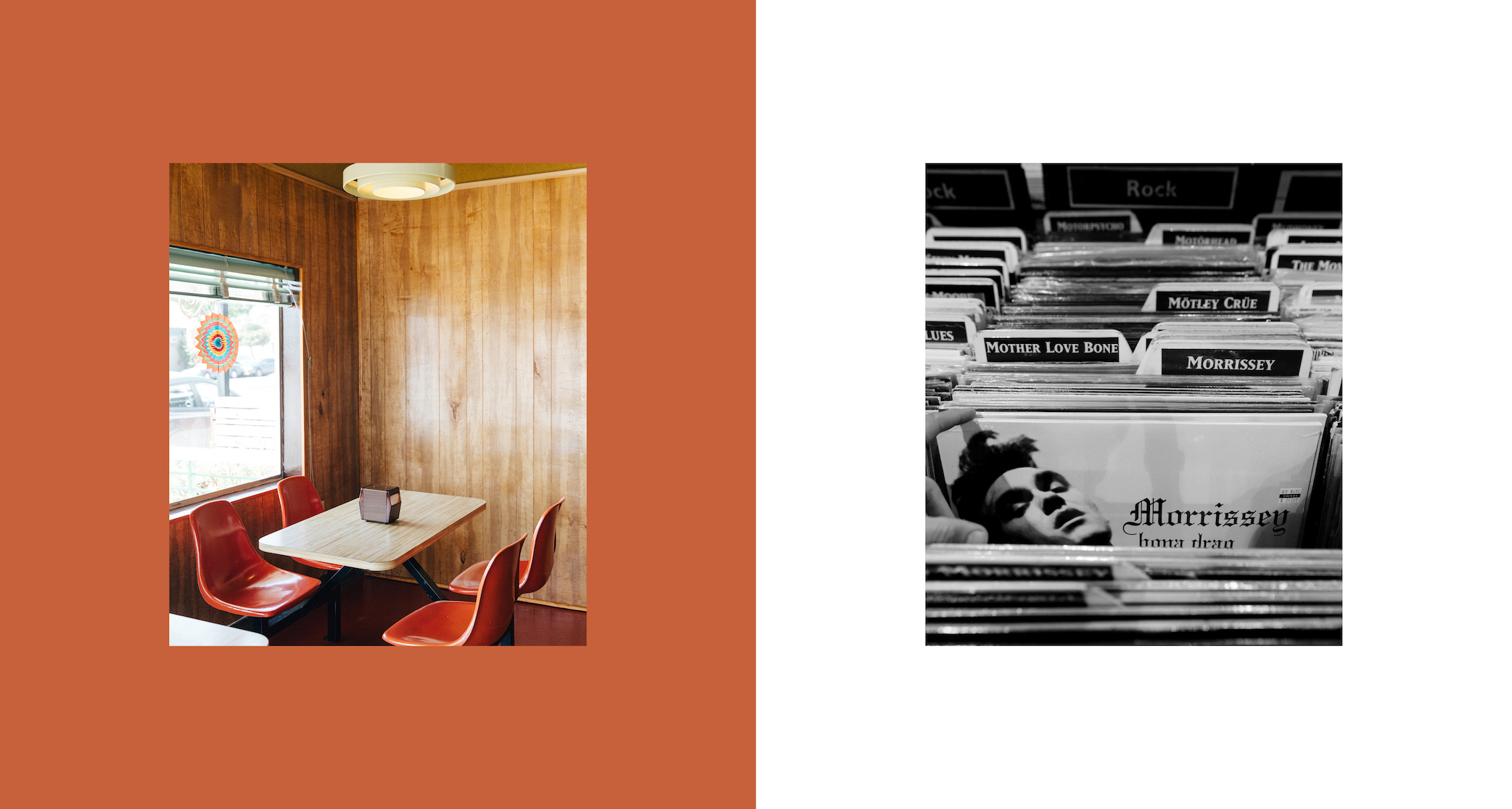 Even if you aren’t in the market for a record or CDs (if people still even buy those), I highly suggest checking out Amoeba in Hollywood. This two-story music mecca is an institution in Los Angeles and one of the largest record stores in the world. With their endless amount of records, movies, and posters, it almost feels like a museum. Amoeba also occasionally hosts free live shows in the store, so those are worth keeping an eye out for as well. When I step into the store I can’t help but feel like I am on the set of Empire Records, imagining each employee as a different cast member and making assumptions about what type of music-genre-seeking customer annoys them the most. Sometimes I am tempted to ask where I can find the Creed and Nickelback CDs just see their reaction.

Moonlight Rollerway is a time capsule. I’m not sure they’ve changed anything in this place since it was built in the 1950s, but that’s a good thing. The idea of skating in endless circles might not initially sound like the most exhilarating thing in the world, but if you show up here with a group of friends, it’s hard not to have a good time. It’s also an amazing place to take a date if you want to show him/her you’re into other stuff besides sitting and drinking in a noisy bar. Even if roller-skating isn’t your thing, this place in Glendale is worth checking out for a unique LA experience. And if you want to make it even more unique, go on Tuesday nights when you can skate to live organ music. Yes–live organ music.

Founded by Salman Agah, Pizzanista! is a staple in the skate community in Southern California. They do regular collaborations with brands and people like Neckface, Vans, Mark Gonzales, Deus Ex Machina and more, and their pizza is damn good. If you go into their Arts District location in Downtown LA, you’ll likely brush elbows with some professional skater who just happens to be in there. Get down to Pizzanista! on Sunday when they are serving their infamous mac and cheese pizza. That’s right–warm, gooey macaroni and cheese piled on top of a slice of pizza. 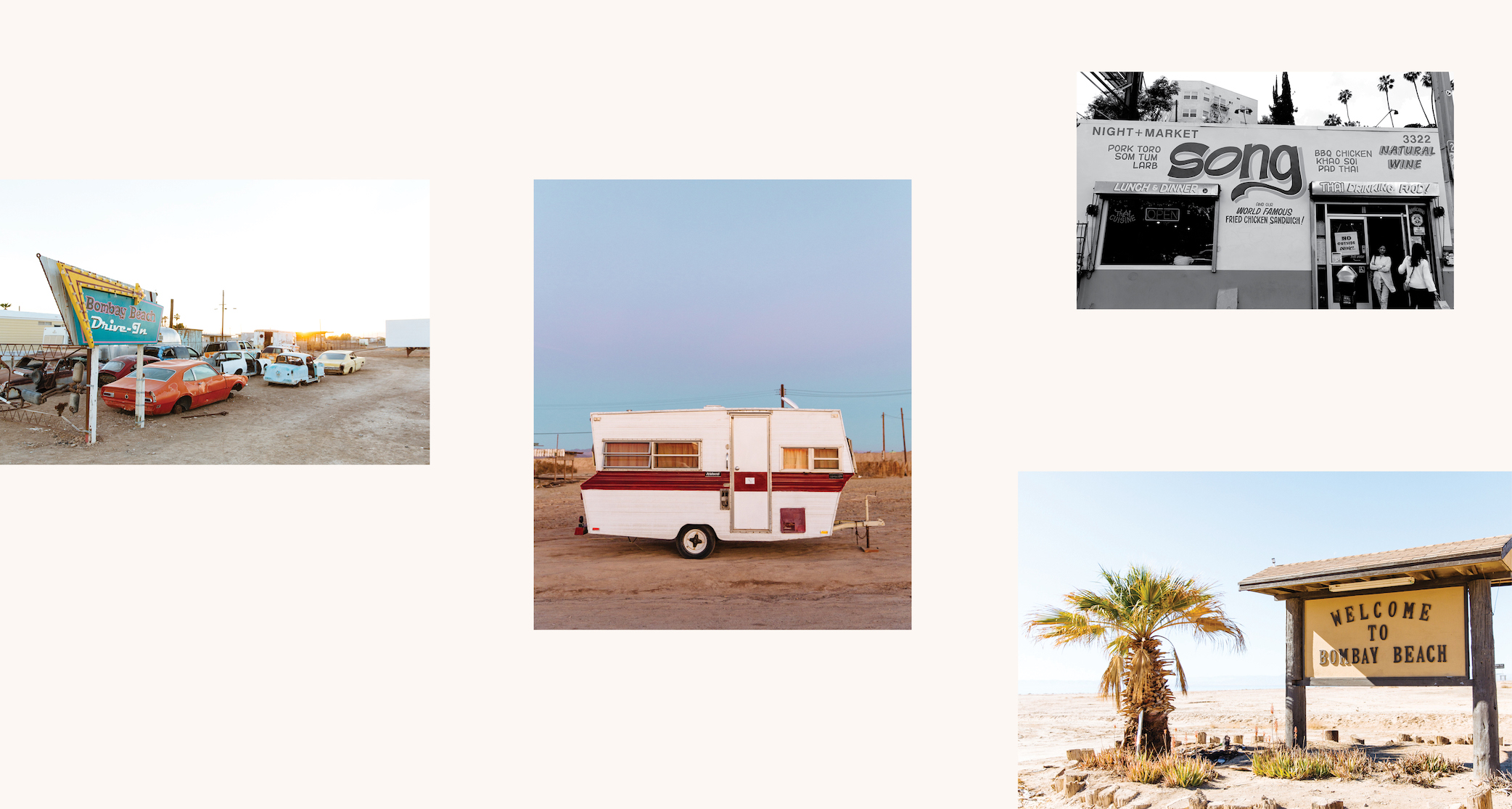 Ninety per cent of the time when I eat out in Los Angeles, I eat some form of Asian food: sushi, pho, ramen, dim sum, you name it. Fortunately, Los Angeles has some of the best. However, if you’re craving Thai food look no further than Night + Market Song in Silver Lake. Chef and owner Kris Yenbamroong has created something special in his series of restaurants, bringing traditional Thai street food to our taste buds. The restaurant itself is a sight to see; unpretentious, bright colours, and an assortment of vinyl floral tablecloths. As casual as the place might seem visually, the food is next-level. The fried chicken sandwich is a must: Chiengrai-style fried chicken thigh piled high with papaya slaw, ranch dressing, jalapeño, and cilantro. If you’re into fermented grapes, they also have an incredible selection of natural wines from all over the world.

Walt’s Bar is housed in what used to be a plumbing store in Eagle Rock. The outside of the building lures you in with the words ‘FINE WINE,’ ‘HOT DOGS,’ and ‘PINBALL,’ which is an odd mix that somehow, they’ve pulled off. Inside, however, is the most tasteful arcade bar you’ll ever experience. The interior pays homage to the era pinball was popularised in, with teal bar stools, orange parlour-style bar top, wood-panelled walls, and vintage pinball machines. Definitely a good place to grab a drink, eat a German pretzel, and use up some spare quarters.

Once an institution in Brooklyn, Zebulon decided to transplant to a warmer climate and arrived in LA’s Frogtown. This place has it all: a quaint front-room restaurant, a bar with elaborate cocktails, a spacious outdoor patio, and a music venue in the back that can hold 300 people. The live shows at Zebulon are some of the most eclectic I have seen, and provide a venue for experimental artists and an intimate space for the more established ones. No matter what type of music you’re into, I’m sure Zebulon will host a band up your alley.