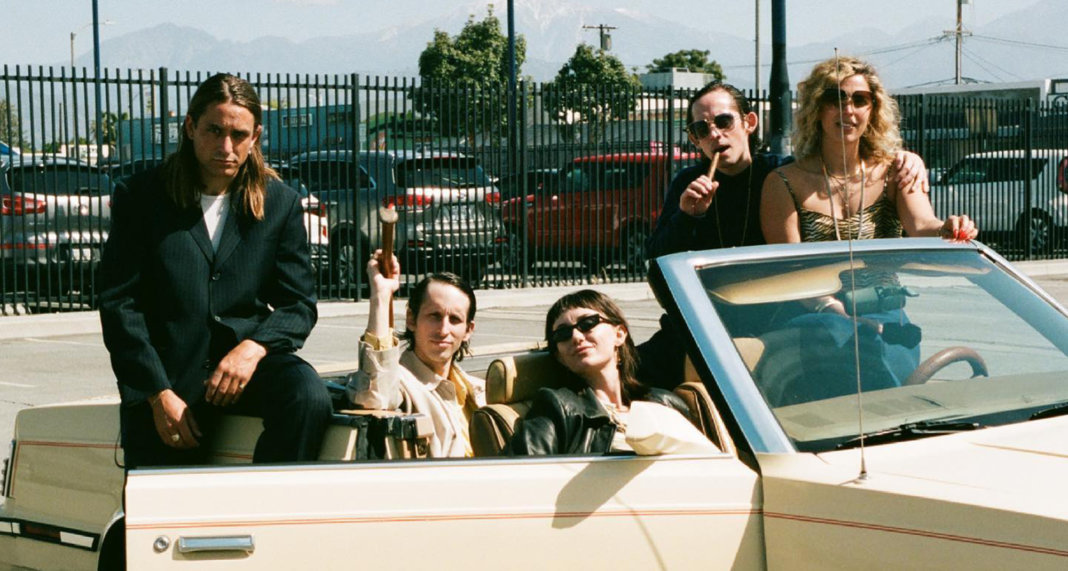 Grady Strange was coming off the back of a Sopranos binge when he had a lightbulb moment involving a meatball sub, a stuntman friend, and his new single, ‘Karma’s a Gun.’

LA-based Grady might count himself as a musician, surfer and skater, but he’s a real wise guy too; growing up just minutes from Jersey Shore meant that even miles and years away from his Italian-American roots, he can’t quite shake his love of meatballs and Axe body spray. So, he embraced it, making a super funny (and surprisingly cinematic) Sopranos inspired music video for ‘Karma’s a Gun,’ filmed at his local LA deli and ready for your consumption right here:

All jokes aside, it’s a really great song that’s both catchy and perfectly grainy, thanks to it being recorded in Grady’s kitchen on a secondhand 4 track tape machine he picked up at a garage sale. So, while we wait for Grady’s debut full-length record, Getting Stranger, out 7/21 via Perpetual Doom (and a spin-off TV series following the Marinara twins, hopefully), we asked Grady to mesh together two things close to his heart—surfing and guido culture—to bring you his Guido’s Guide to Surfing. Dust off your V-neck wetty and grab your strong-hold hair gel… Grady’s taking us surfing. 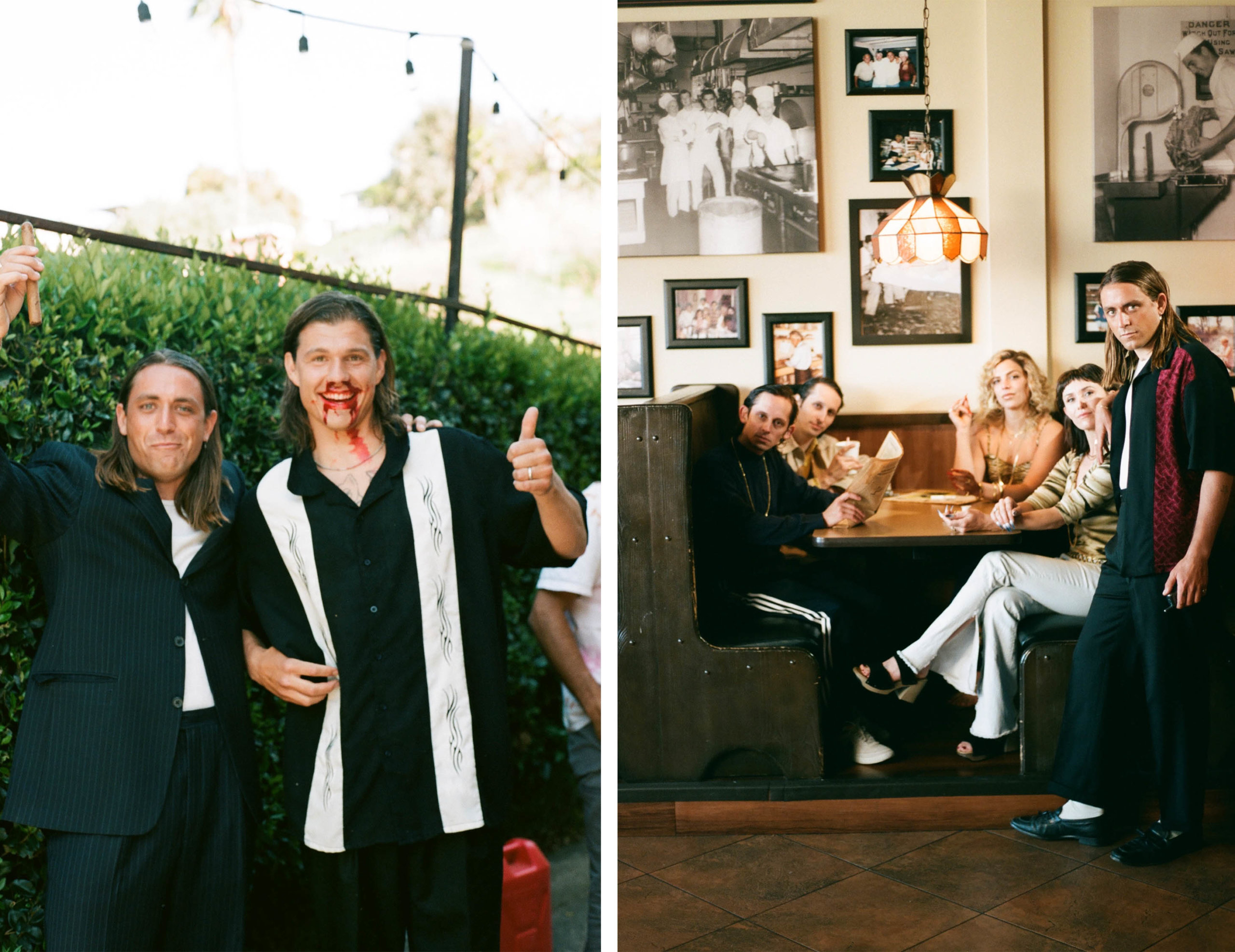 PREP
First and foremost, you need to make sure you’re energized. Ziti is too heavy, and bruschetta is for boogie boarders. Tell your ma to make meatballs and red sauce the day before, and have her pack at least 8-10 into a ziplock bag.

MAKE AN IMPRESSION
Next, you want to make sure you stand out in the lineup. You don’t want to pull up to the Malibu lot looking like one of the stoned-out hippies hanging out at the wall. They smell like patchouli and sweat, you smell like axe body spray and dryer sheets, so look like it. Cut the neck of your wetsuit into a deep V. It will allow a bit more water to flow into your suit, but it will also allow you to show off the gold chains that lay atop your superior chest hair.

BOTTOM TURN
When you pop up on your first wave, you’re gonna wanna look down the line and do a bottom turn. Think of this as you pre-gaming for a night at the club: gel’s in your hair, goatee is trimmed, you just took your first shot of Jager. The vibe is officially set.

LOCK IT IN
Now the wave is starting to stand up, time to lock into the pocket and start to trim. Imagine yourself walking into the club in this moment. The boys just threw their fists in the air for a few synchronized pumps. You spot a smokin’ hot guidette, a little Italian meatball. Or maybe a gorilla juicehead guido. Their orange glow is almost blinding at first. They’re perfect. It’s time to make your first move. Lock it in.

BUILD THE ENERGY
Go for a nice big carve off the top of the wave. If you’re feeling a lack of confidence, just imagine you’re going up to that hottie and saying, ‘Hey baby, I respect you.’ They go for it. You’re the man/woman. Your favorite Tiesto song comes on. The energy is building between you and the wave.

TIME TO REEL IT BACK
You may gain too much speed at some point and end up on the shoulder of the wave. It’s time to reel it back in. Like the time you did a few too many body shots and yelled in that girl’s ear about how much you miss your ex for 10 minutes. Let’s do a cutback. Look over your shoulder and carve back into the meat of the wave. You’re gonna wanna respectfully tap the white water just as you would gently bump up against the ass of your new connection at the bar. The tender move works. It’s on.

MAINTAIN YOUR COOL
Now the energy is raging out-of-control between the two of you. The lip of the wave is starting to fall over you. Stay calm. This moment should feel comparable to grinding on the dance floor with your new fling. You can feel their hair spray burning your nostrils.

SWAPPING SPIT
The barrel is spitting down at you. Think of this as you swapping spit with this smoke show. You wish this moment would last forever. You’re in the barrel, bro. This must be the place.

JUST LIKE THAT, IT’S OVER
In a flash, you get spit out of the tube. You’re so wrapped up in the thrill that it takes you a moment to realize the wave has ended just as quickly as it began. You’re left sitting on your board, clinging tight to the memory, wanting more. You’re gonna wanna look back to the beach to see if your friend filmed it. Similarly to how you would ask if your boys saw you gettin’ it at the club. Don’t be confused if the boys throw you a shaka, that’s beach slang for ‘hell yeah.’

FUCK THE LOCALS
Now start to paddle in. If a local calls you a ‘fucking kook’, don’t worry about it. You’ve been called a benny at the Jersey Shore many times before. He doesn’t even have a six-pack. Go hit your blueberry vape, let the water glisten on your biceps, and soak in the bliss.

ALL GOOD THINGS
You did it, bro. You’re a guido surfer. And though you’re left wanting more, there’s a lesson to be learned in all of this: Just as no love in the club lasts forever, all waves come to an end.

Pre-order Getting Stranger here, and stay up-to-date with the meatball madness on Instagram @gradystrange.mp3