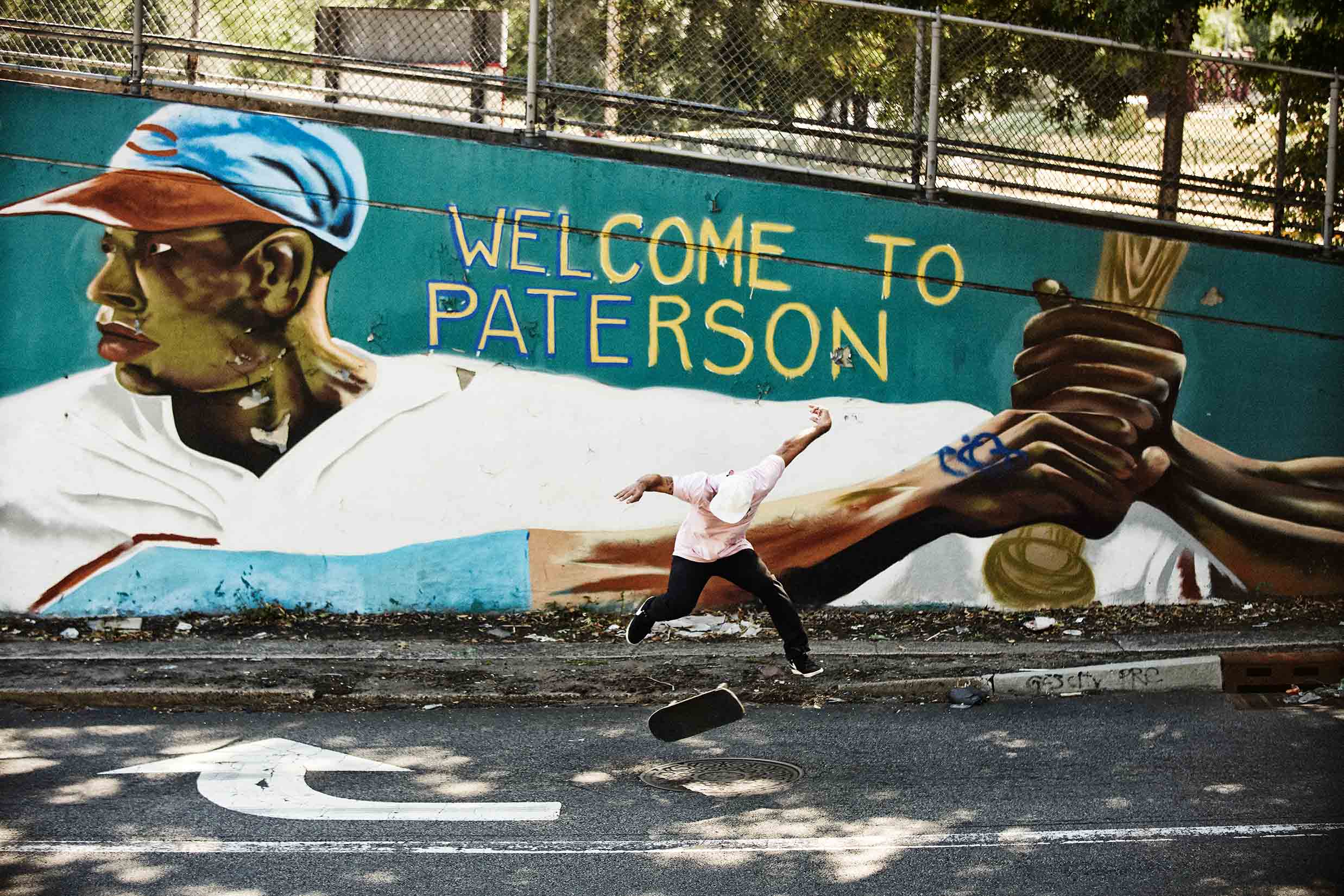 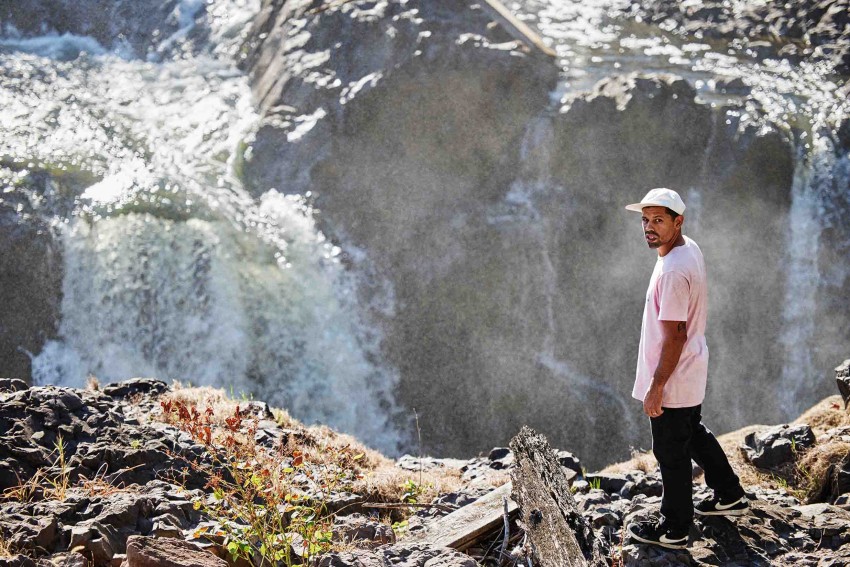 Paterson, New Jersey, is having a bit of a moment. Fetty Wap, born and raised in Paterson, is the first rapper in history to have four top ten singles at the same time. Not only that, but another of its most celebrated sons, German Nieves, has just unveiled the fall/winter collection of his clothing brand, also called Paterson.

Paterson is a fucked-up town, though it hasn’t always been. Playing host to the second largest waterfall on this side of the country (the first being Niagara Falls), the city was pivotal in the birth of this silly nation’s Industrial Revolution, as it helped to power the city’s mills and factories. Paterson’s main export was silk, giving it the moniker “Silk City.” A bunch of other shit and dudes came outta Paterson, like Rubin “Hurricane” Carter, the boxer in the Bob Dylan song who was falsely accused of murder. Also Larry Doby, the first black man to play in baseball’s American League, grew up in Paterson.  Furthermore, William Carlos Williams, the great modern poet, is from Paterson, held a medical practice there, and wrote most of his poetry while residing there.

Williams wrote his magnum opus about Paterson—an epic poem that borrows its title from the city. The poem is incomplete, spanning five and a half books, and addresses the city of Paterson as a place, a person, and as a metaphor for America as a whole.  It’s heavy—don’t read it. A couple weeks ago, I went to Paterson with German Nieves of Paterson, and we talked about Paterson and Paterson while driving around and skating spots in Paterson. 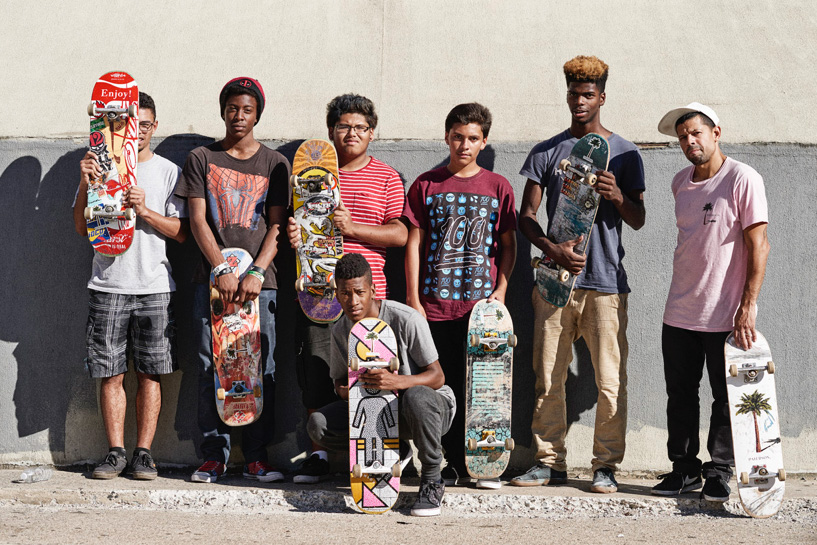 If you’re not familiar with German, he’s been a staple in the skate scenes of New York, Philly, and New Jersey for over twenty years.  His style and finesse on the board have earned him clout for life—and his skills haven’t lost their luster. His taste and understanding—not only of the skate industry, but simply what looks good—led him to create the brand Paterson a little over a year ago. Our first stop was Eastside Park, where Germ played baseball and went sledding growing up, and where people go to smoke tons of pot instead of going to school. 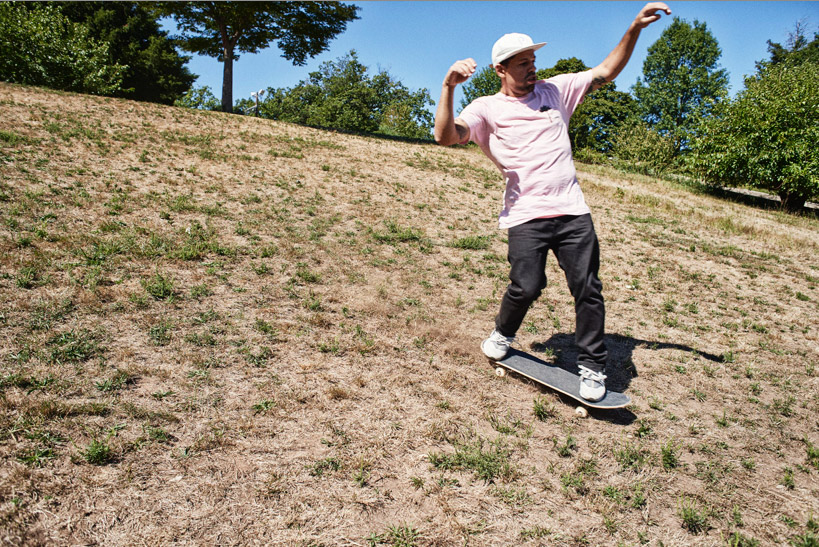 “This is Eastside Park. This is Paterson’s park. This is the hub. It’s beautiful! They filmed the video for ‘Trap Queen’ here and some other videos were filmed here. But this ain’t about Fetty, this about me!” – German Nieves

Paterson (the brand) started with a mixtape in December 2014. ‘My friend Teddy Powell and I made this little mixtape and I made this shirt to go with it. The mix was called ‘Made for Play,’ which is our motto. Robert Lim helped me with some design stuff and put me in a good spot to start off. So we started making this brand. The reason why I named it Paterson is because it just sounds like Wilson or Spalding or Rawlings…one of those sorts of sporty, athletic brands. I like brands that have that history and that heritage, and I want to do that with Paterson…like an updated version of one of those brands.’ 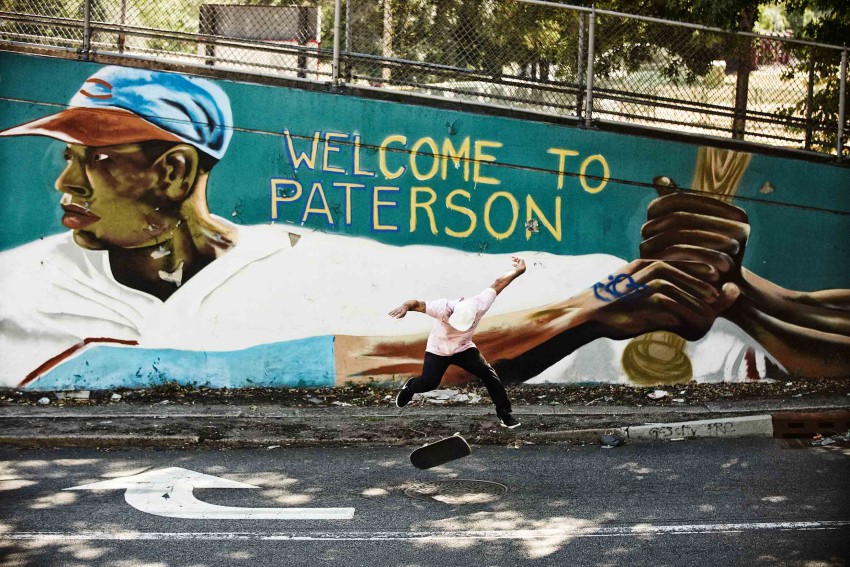 We went and checked out the building German grew up in—a place he hasn’t been in over two decades. He got into BMX first, going on missions with his best friend Andre, who we actually bumped into; he still lives around the corner. 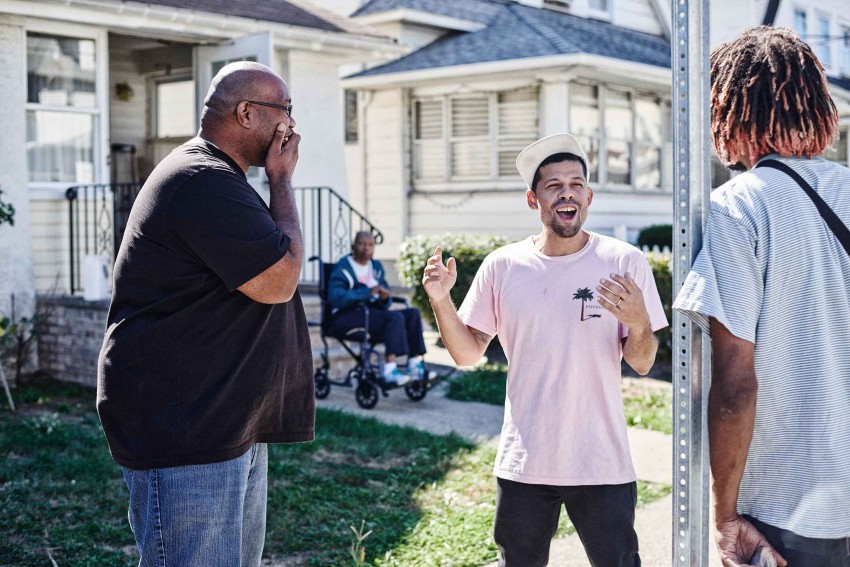 “Andre and I were ‘Rob and Big’  before ‘Rob and Big,’ and he’s the one who got me into skating. We were into BMX when we were young, and there was this BMX track that ran along the railroad one town over in Fairlawn. There were a couple spots by there, and so we met people on the way, skaters, whoever. These guys had a launch ramp set up on this basketball court, and they looked cool as fuck…like Gator or some shit. They were doing what we saw in the magazines. That image of that old school skater was cool to me. Looking like Gator and Tony Hawk.” 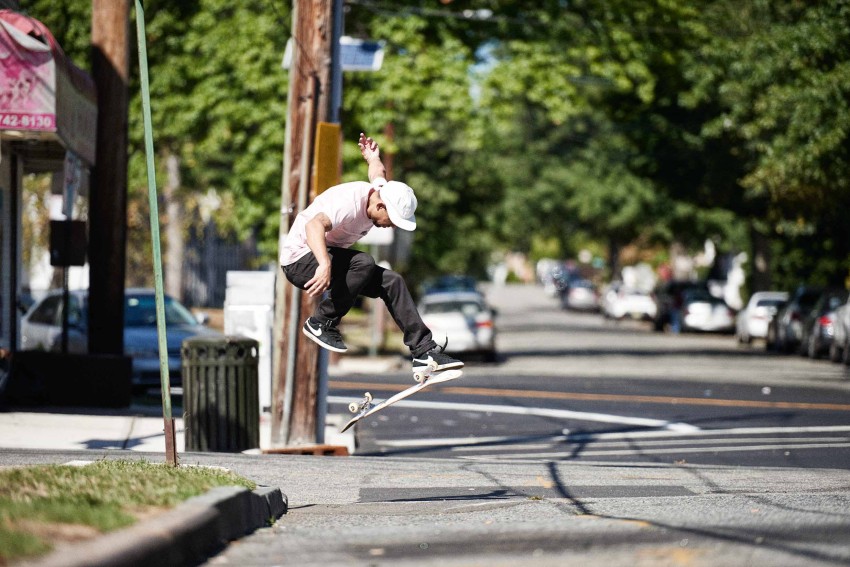 The brand takes some of its inspiration from tennis graphics and apparel, while retaining its status as a skateboard brand. ‘Skateboarding is not a sport but it’s almost like a performance. I want to make performance clothing that’s stylish.  I like to play tennis, I got into it a couple years ago. I want to infuse the two because they’re both very similar. Tennis is super stylish: every tennis player has their own style, just like skateboarding. There’s the aspect of the individual.’ The new line is titled “Night Game.” The gear is super simple‚ minimal, and classic. ‘The idea was to create a mood, to give someone a feeling when you’re wearing it. I eventually want to be a sponsor of the U.S. Open—have the ball boys wearing my shit.’ 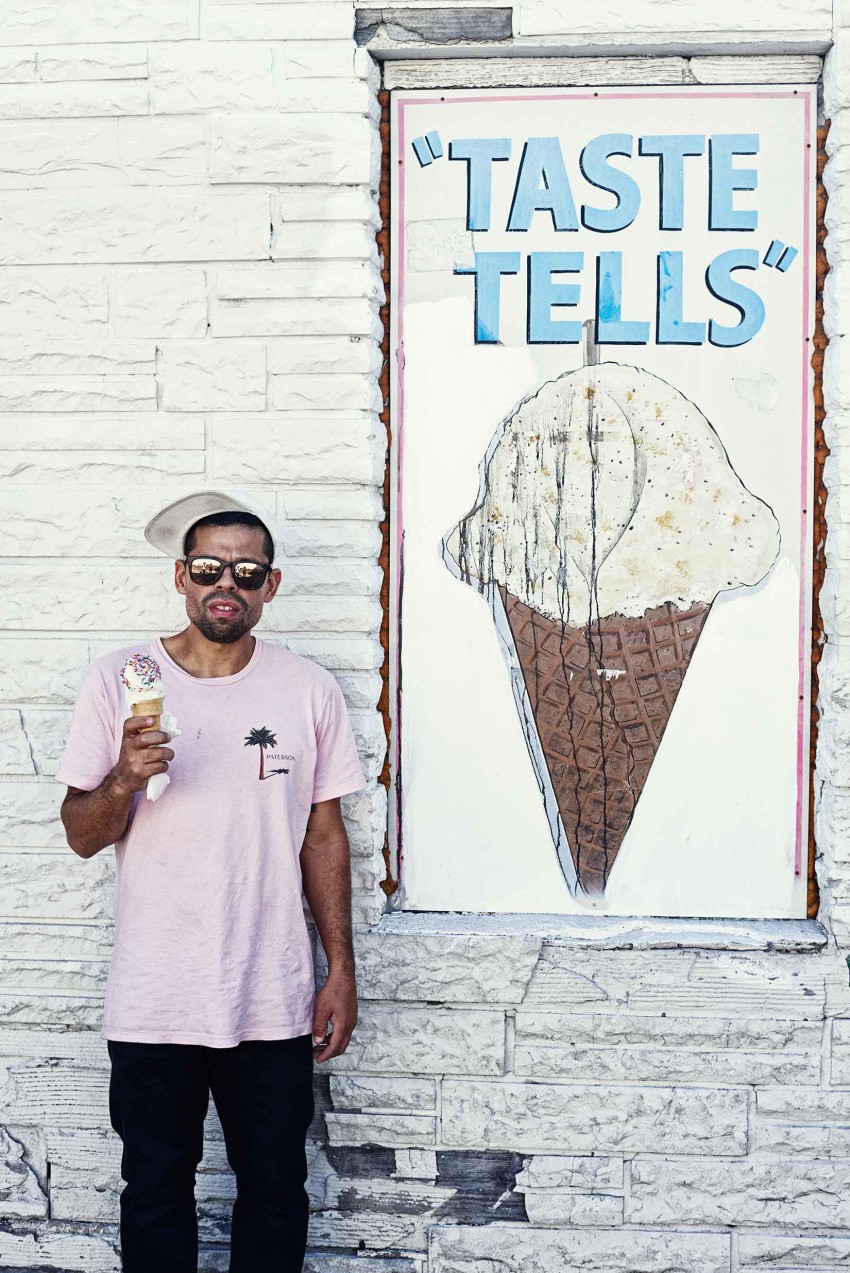 We hit some spots downtown, checked out the Falls, snuck into the abandoned Negro League stadium, then said our farewells. I asked Germ if there was anything else he wanted to add, and this was his reply:

‘People always ask me, ‘Why Paterson?’  ‘Paterson, NJ?’  Yeah, of course. But also, think past that. That’s the approach of the brand. Make you think about one thing, and while you’re thinking, hit you with an Iverson crossover and I’m already at the bucket.’ 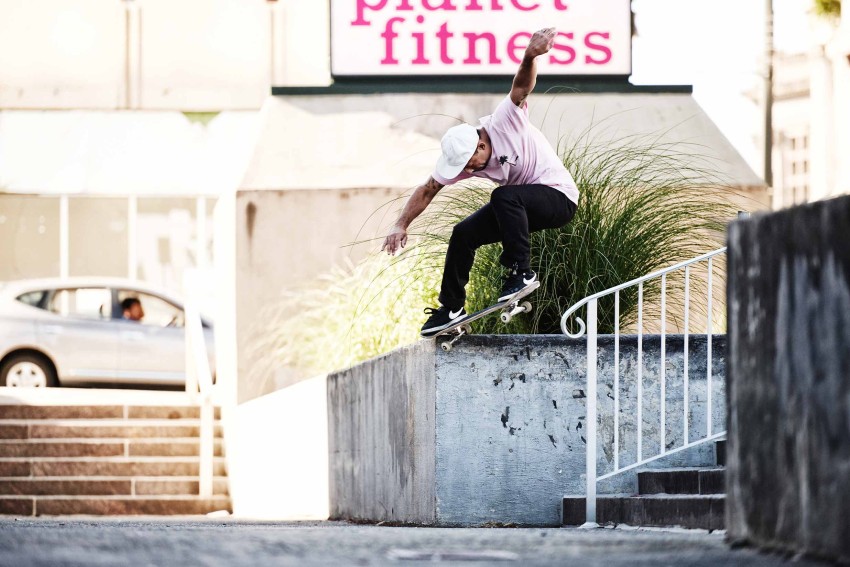 What a guy.  All of the Night Line collection is available here.  Also, support Fetty. He’s a good tipper and he’s nice to women. 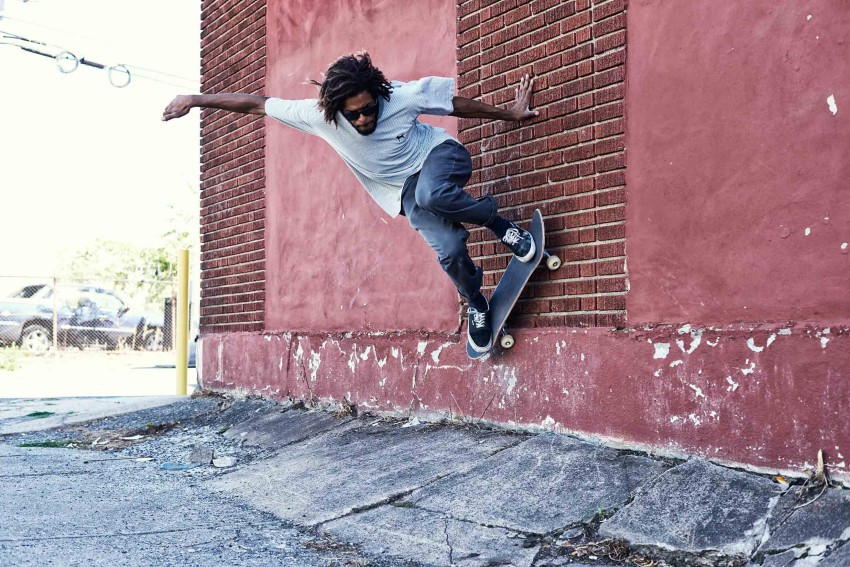