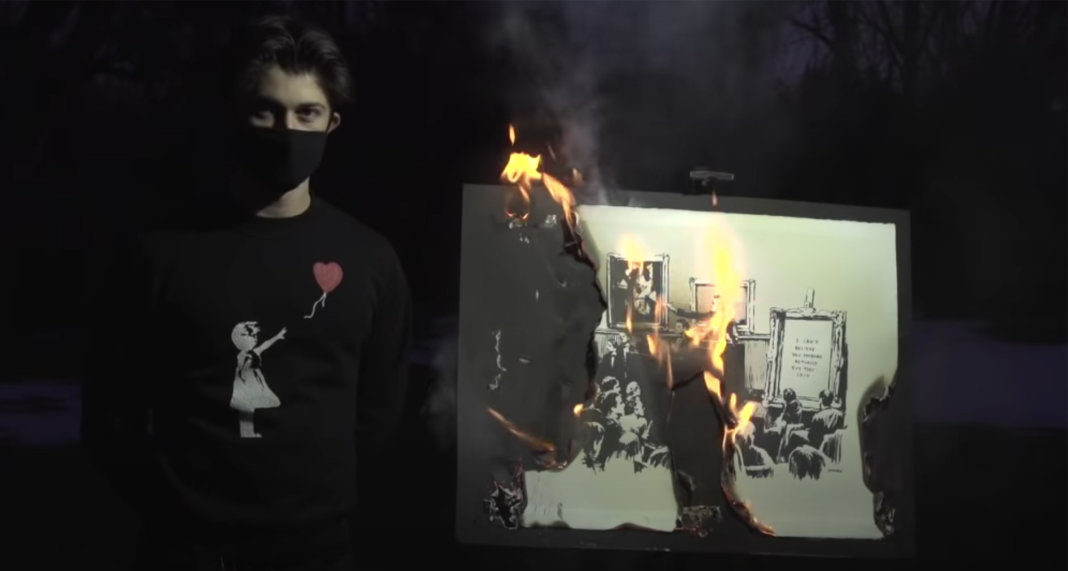 A Banksy artwork worth $95,000 was burnt on camera so its owners could sell it as a piece of digital art.

If this sounds like the most moronic thing you’ve heard so far this year, odds are you haven’t yet entered the tangled web of the internet’s most-hyped new trend, NFTs or non-fungible tokens (Before reading any further, you might want to read our idiot’s guide to NFTs, where we explain what they are, how they’re taking over the art world, and why people are spending $600K on a cat gif).

Back to the Banksy: in a video released online yesterday, a masked figure speaking on behalf of blockchain co. Injective Protocol stands next to a certified Banksy print titled Morons (White), which features an art auctioneer selling off a piece that displays the text, ‘I can’t believe you morons actually buy this sh*t’. The irony is strong with this one, young padawans.

Not entirely true though, tech guy. The print is actually just one of an edition of 500, so there still exists 499 other physical copies of Morons (White) on earth—unless another excitable individual has also taken to their copy with a Bic lighter in hopes of cashing in on the NFT gold rush.

Speaking of lighters… can someone get this guy a decent one? With the video’s intention of making a marketing splash, you think they could’ve thrown some petrol on that thing, or at least gotten a BBQ lighter. The wow factor of burning a Banksy decreases with every passing moment the artwork refuses to go up in flames. Anyway, if you want to look at a house deposit crumbling into ashes hit play on the video above. Alternatively, if you’d like to blow some money on buying the now minted (once again, refer to our guide to NFTs here) NFT on OpenSea, it’s up for auction until 9 March and bidding currently sits at around $10,000.