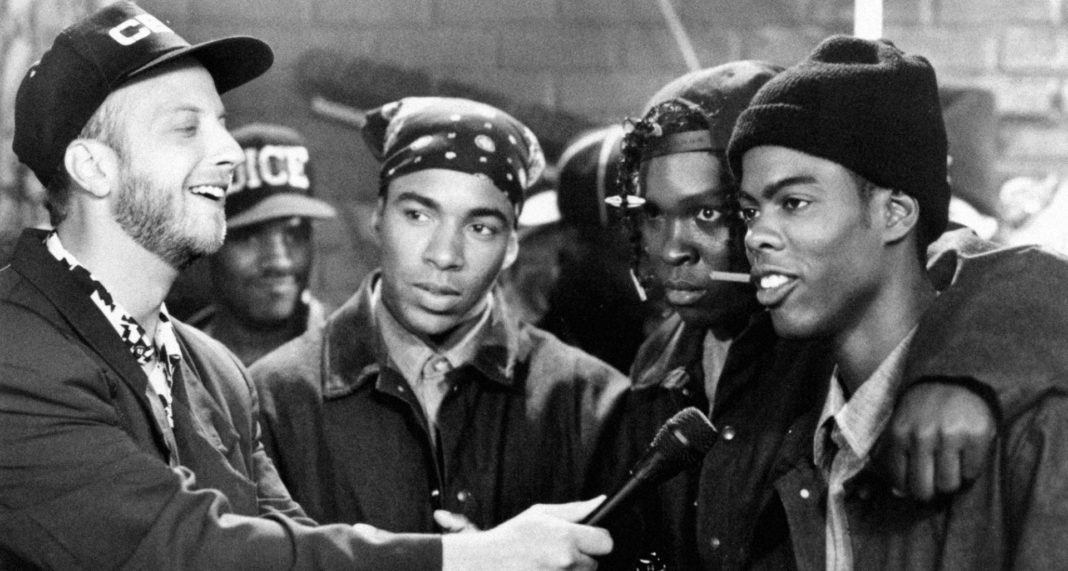 When I say music mockumentaries, your first thought is almost guaranteed to be This Is Spinal Tap.

Which is great—Spinal Tap is awesome—but there are so many other music mockumentaries out there (five), and I think they get overlooked. I’ll be at the bar and I’ll quote dialogue from one of these flicks, and instead of chuckles, I’ll get blank stares and feel silly. And I don’t like feeling silly unless I’m being deliberately silly, which is most of the time, so it generally works out. Anyway, rat-face, here are 5 music mockumentaries that I believe you will thoroughly enjoy, or we’re not best friends anymore.

CB4 lampooned the gangsta rap genre at a time when gangsta rap was new and mean and coming to get you. I was terrified of gangsta rap as a kid. I was in love with hip-hop, thanks to Public Enemy and RUN DMC, but when NWA rolled up and started talking about murdering policemen and getting blowjobs, I was afraid—but the makers of this film weren’t. CB4 is a send-up of NWA, starring Chris Rock as MC Gusto, leader of the rap group CB4 (Cell Block 4), and it is hilarious. And the fake rap tunes—which sound ‘dope’, incidentally—are lyrically hilarious too. Also, the film is peppered with cameos from Halle Berry, Butthole Surfers, Ice-T, Ice Cube, Flavor Flav, Shaquille O’Neal, and even Eazy-E. Definitely check this one out.

Now, this is one of my all-time favourite things that ever happened on television. Bad News is a mockumentary that follows the shittiest band in heavy metal, Bad News, on an ill-fated tour of England. It aired as a two-parter on the BBC’s groundbreaking comedy show The Comic Strip, and by pure coincidence, it was in production at the same time as Spinal Tap. Personally, I like Bad News better. It stars future Young Ones alumni Ade Edmondson, Nigel Planner and Rik Mayall (RIP) and features cameos from Lemmy, Def Leppard, Ozzy Osbourne, and more. It’s so, so funny, and the whole thing is available to watch on YT.

This one isn’t funny ha-ha, but more funny huh? Based on Brian Aldiss’s 1977 novel of the same name, Brothers of the Head is the story of Tom and Barry Howe (played by actual brothers Harry and Luke Treadaway), conjoined twins who form a rock band called Bang Bang and rocket to fame and fortune. But then everything goes a bit weird when one of them falls in love with a music journalist and the other brother has to be in the room when they fuck. It’s a very interesting film. I think you should watch it right now, even if you need to go to the toilet.

This is another of those Christopher Guest ensemble pieces. If you liked Waiting For Guffman and Best in Show, you will absolutely love A Mighty Wind. The film features the usual suspects (Eugene Levy, Catherine O’Hara, Michael McKean, Harry Shearer, Fred Willard, Bob Balaban, Ed Begley Jr., Jennifer Coolidge, John Michael Higgins, Jane Lynch, Parker Posey, and of course Chris Guest) cast as various fictional figures from the American folk music revival of the ‘60s. After the death of the legendary (and fictional) folk music producer Irving Steinbloom, a memorial concert is organized and the old folkies have a reunion. Fun fact: One of the phony folk bands, The Folksmen, is played by the same actors (McKean, Shearer and Guest) from the phony band Spinal Tap from twenty years earlier. Lots of LOLs.

The Rutles: All You Need is Cash takes aim at The Beatles and their legacy, which is pretty ballsy, but then George Harrison was happy to play a television reporter in it, so I guess they got the green light. It was co-written by Eric Idle and Neil Innes, and, with Idle being one of the Monty Python dudes, the film is as absurd and ridiculous as can be. The Rutles traces the same chronology of The Beatles, from the early mop-top years to the LSD/Maharishi years, all the way up to the band’s early 70s infighting and dissolution. Yoko is depicted as an artist named ‘Chastity, a simple German girl whose father invented World War 2.’ Bit harsh, but very funny. You watch.