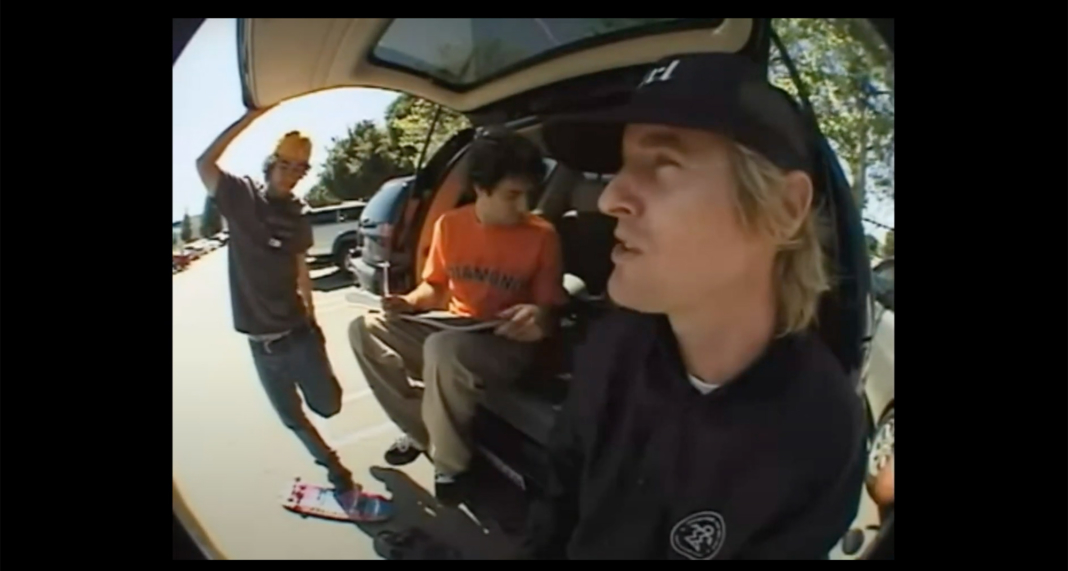 Tricks are documented with a mix of closely filmed fisheye footage and long lens shots, edited to a song, which sets the vibe. In between the tricks, you might see ‘lifestyle footage’ of pros pushing around the city, shaking hands, puffing joints, or drinking beers. Sometimes there are glimpses of traffic passing in fast motion, clouds rolling overhead, or a slow-mo clip of a skater cess sliding into a band of unsuspecting pigeons, which then fly away. Almost every clip I’ve seen in recent years—whether it’s a full-length skate video, a shoe ad, or a team montage—has some element of the above descriptions. But every once in a while, a video comes out that is shockingly different in its look and feel. This doesn’t happen very often, but occasionally, something comes out that is so experimental that you wonder what the hell it is that you’re even watching. Love ‘em or hate ‘em, they’re the kind of videos that defy genre. Sometimes they’re accepted, celebrated and then added to the canon. Other times they’re criticised into obscurity, left to quietly fade into the back catalogue of the internet. Here are a couple that I liked and remembered.

The biggest criticism of Jobs? Never!! is probably the lack of skateboarding. That’s a fair cop because, mostly, it feels more like an experimental indie short film than a skate video. There are tricks – from Jim Greco, Tom Penny and a few others – but most of the screen time is taken up by Greco quietly cruising around New York. He takes a brutal slam onto his back, goes to hospital, slips into a reverie, then returns to a warehouse apartment where he shares a wordless and yet strangely intimate relationship with a woman on the couch. The whole thing is bizarre and melancholic but super captivating, prompting you to search every shot for the hidden meaning. Does the fire truck driving past at the beginning symbolise the injury to come? Why is the woman watching The Deer Hunter? Is the dreamy skate session with Tom Penny a reference to Flip’s Sorry, where Arto slips into a dream and skates with Penny? I have no idea what the film means, but I couldn’t look away.

There are so many things going on in Spirit Quest that make it unique, from the extreme close-ups of reptiles to the split-screen effect that often merges into a single shot, it’s a wild audio-visual experience. And while it’s certainly creative and groundbreaking, it probably wasn’t very high budget. It still looks like a video that was filmed with a couple of VX1000s and painstakingly edited to perfection. It’s the sort of video where you’re forced to think about what you’re looking at and to wonder how the hell it was done. Spirit Quest is straining on the eyes at times, a visual onslaught of street steeze and visual confusion, but it’s an enjoyable ride. Hats off to Colin Read for this one.

Admittedly, this video was more groundbreaking for the skateboarding than the videography, but it was visually groundbreaking none the less. The concept was super simple: it’s just Daewon Song and Chris Haslam getting tech on a mini ramp, setting up all sorts of skateable contraptions that resemble that old board game, Mouse Trap. In the opening shot, Chris Haslam knocks over a succession of dominos by doing a series of lip tricks, then jams his board into a piece of plywood to flip over a board and spell ‘Almost’. By the end, they’re getting tricks on dodgy-looking polejams and precarious tire swings. This video became so iconic that 14 years later a couple of British dudes made a tribute called Tea and Biscuits.

When we talk about ‘experimental’ films, we’re not usually talking about the most influential films of all time, but Yeah Right! became an instant classic. Directed by Ty Evans and Spike Jonze, it was a high budget video, showcasing all sorts of special effects and a cameo from Owen Wilson. The film begins with a bunch of flat-ground tricks shot in super slow motion, apparently with a camera that could capture a hundred frames a second. Then there was the invisible boards section, which used green screens to make it appear that the skaters were floating around on nothing. And of course, there was that montage with that ‘magic’ board, with each skater getting their trick then throwing it out of shot, only for the next skater to catch it and get another trick at a completely different spot. Yeah Right! must have been the first film where high budget Hollywood special effects were thrown in with regular skateboarding, paving the way for wildly popular follow up videos like Fully Flared and Pretty Sweet.

Another classic, Photosynthesis could have come out yesterday and people would still be celebrating its unique aesthetic beauty and grainy, analogue style. I’m sure there were other skate videos that had already adopted the VX and Super 8 mash-up (Memory Screen maybe?) but Photosynthesis was the first skate video that I saw that was proper arty. Between the piano music, the sepia tone squares and the jump cuts of plants, cityscapes and team riders, I’d never seen a video like it. As Jason Dill said in an interview with Nieratko years later, ‘Oh, look at me getting artsy. How old was I, like 21? I was filming stuff with my Super 8.’ He also admitted that he smoked a lot of crack during the filming of Photosynthesis, which contextualizes the phone call at the beginning of his part where a guy called Carter tells Dill that he’s worried about him. His response is classic Dill: ‘Maybe I am that fucked up but I’m not thinking that I am. And maybe that’s worse.’